Lately Fab Defense has released two products and is about to release several more in the near future.

The new products for this week are the “Tar Podium” and the “VFR-SVD”!

The TAR Podium is specialty made bipod for the TAR 21 which replaces the grip bottom cap to provide steady and durable bipod while maintaining free gripping space. It was designed by Tamir Porat, the designer of the Tavor TAR 21 with the help of Fab Defense to ensure top quality and best compatibility to the TAR 21.

After it was tested by Israeli professional soldiers, we can say with no doubt that this bipod is the best bipod solution for the Tavor so far.

Unlike other standard bipods, this one is very compact, light weighted and does not bother you while carrying the Tavor.

The VFR-SVD resembles the popular VFR high-end rail systems in its features.

This new version is made especially to perfectly fit Dragunov Sniper Rifle (7.62x54m) and to give you the perfect picatinny solution.

This rail system has been field tested under the most extreme conditions by professionally trained military soldiers to ensure that your weapon won’t betray you when you most need it.

No professional gunsmith is needed to install this rail system.

“Fab Defense” have made the design as simple as possible while not compromising on material and features.

In addition to the TAR Podium bipod and the VFR-SVD, Fab Defense in about to release more products in the upcoming months!

Their new line consist of the Ultimag “Smart load magazine” that will introduce a new and faster way to load the bullets, The “VFR-25”, a new quad rail system for SR-25, The “SVDM L-400” – a longer version of the SVDM Dragunov scope mount and after endless requests, the PDC, scope mount for AK-47 which converts your rail to Flat-Top!

The prices and other info are still unknown but we will keep you updated as soon as we know the details.

We will be the first to offer those products as soon as the factory releases them!

We gurantee that Fab Defense products are top quality, hence, we are giving a one year free warranty on those products!

FAB Defense® Scorpus® holsters and magazine holders are now out!

FAB Defense is now out with a new holster line including: Level 1 & 2 holsters for Glock 9mm versions... read more 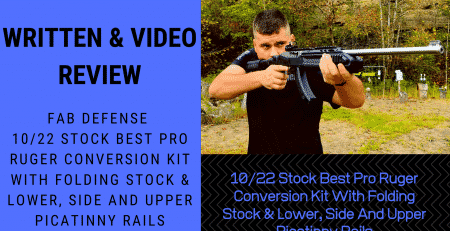 Buttstocks – Never Settle or Less Than The Best

It doesn't matter if it's a shotgun, a rifle or even a sniper rifle, the buttstock is the basic... read more

Exciting new products coming from FAB Defense this year! AR-15 Podium: Fab is about to release the a new bipod, same... read more

Protection is a Priority!