Fab is about to release the a new bipod, same as the Tar Podium but for the AR15 rifle.

It will be attached to the AGR-43 pistol grip and will feature the same properties as the Tar Podium for the Tavor.

The greatest advantage of using this bipod is its location, it attaches to the pistol grip and magazine lough instead of the lower Picatinny rail and saves a lot of necessary mounting space.

Currently, it will only fit AGR-43 while in the future Fab will expand the podium compatibility to several more grips and weapons.

This bipod is in its final development stages and should be available in the upcoming months.

In addition to the podium, Fab introduced in the Shot Show exhibition, the Golden edition of the K.P.O.S which is the same as the Generation 2 K.P.O.S but with a Gold coating.

The new products that were already released for the year 2016 are New Scorpus Holster for USP, new K.P.O.S compatibility for S&W M&P and new VZ magazine and the awaited Ultimag Smart Load magazine!

Moreover, Fab will release a versatile carry holster for the K.P.O.S (K.P.O.S G2 VCH which can be wear on the hip or on the shoulder) in the upcoming months, an inside Waist Band for Glock, a Sopmod Stock and a new cheek piece for their well know stocks.

It will save your life:https://youtu.be/kgBzqzSLdlYWhat is a bulletproof vest (also called Body Armor) exactly?Its a personal armor capable of... read more

How to Get Your SBR Tax Stamp

Here are a few clarifications about our conversion kits, and the permits involved in buying and using a conversion... read more 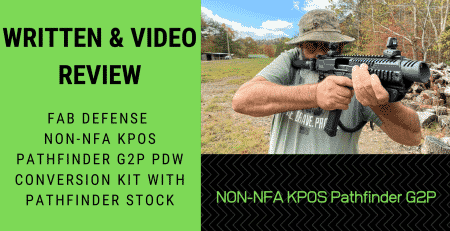 New Product from FAB Defense: 42-10 Plus 4 magazine extension for the Glock 42

New Product from FAB Defense: 42-10 Plus 4 magazine extension for the Glock 42 Due to the demand from our... read more

Review: FAB Defense KPOS Scout for Glock - Range Test In the world of Glock pistols, there are no shortages... read more

Buttstocks – Never Settle or Less Than The Best

It doesn't matter if it's a shotgun, a rifle or even a sniper rifle, the buttstock is the basic... read more

Press Release – IGB Barrels from Austria to the USA

Press release - IGB Barrels From Austria to the United States. We are proud to announce that we are now... read more